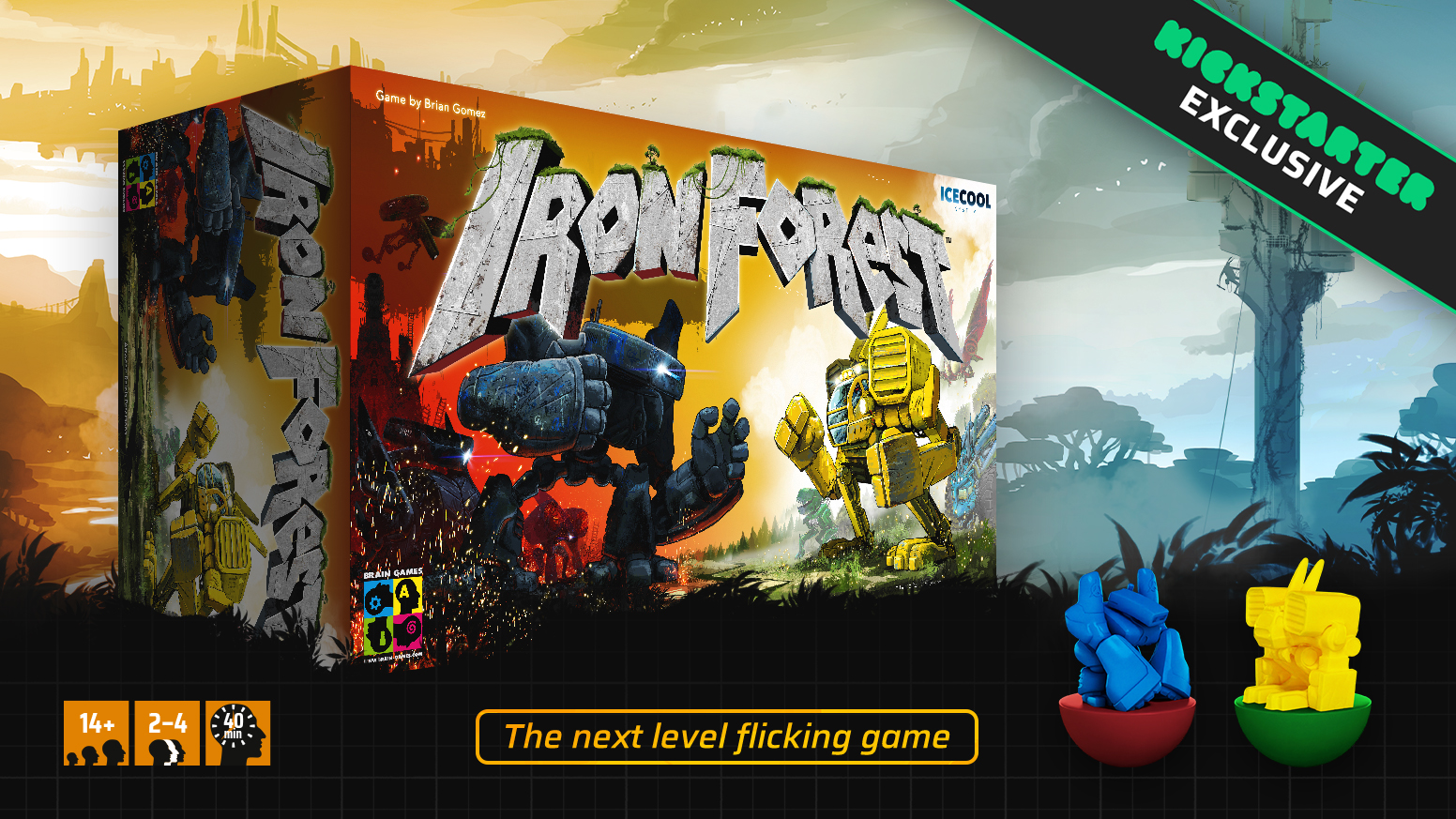 The next level flicking game from the creators of ICECOOL. PLEASE NOTE: We currently don't have shipping & VAT/tax prices entered for physical rewards in BackerKit. We plan to wait until closer to fulfillment to enter & charge you for the physical items to get the most accurate/fair fulfillment prices. We will update backers after entering those shipping prices & VAT/tax before we charge you in BackerKit. For estimate shipping fees, please visit Iron Forest Kickstarter page.

Latest Updates from Our Project:

In this update you will find free stuff, launcher info, link to the AMA tomorrow plus we want to hear your ideas!

If you would like it, all you need to do is sign up to our newsletter and it will be added to your pledge automatically FOR FREE! The pin will come with the game, no matter if you backed during the campaign, or added it in the pledge manager.

If you're not sure if you are on our mailing list, just try subscribing again and Mailchimp will inform you if you are or not.

Some backers have asked us about the longevity of the launcher. After many many playtesting sessions, our launchers are still launching strong!

In an unlikely scenario if you will receive a damaged launcher with your pledge, or it will break due to no fault of yours - don't worry, we will be replace it for as long as we can.

LIVE AMA with the designers and artist.

A little reminder that on Saturday February 12, at 3pm ET time, we will be hosting LIVE Ask Me Anything with the designers and artist of Iron Forest. The live stream will go on for about 90minutes. Join us!

Link to the LIVE stream: tinyurl.com/IronForestLiveAMA

STRETCH GOALS - the floor is yours!

You, our backers, are amazing! We have nearly reached 200% funding and it is all because of you, hurrah!!

So what are these Bombshells that you just unlocked, you ask? Want to blow up opposing team's mecha with one shot? No problem. If you hit it with your Bombshell it is KO'd immediately! Bombshells is a mini expansion that introduces new optional action that both teams can do on their turn - launching and flicking the Bombshell.

And onwards with our next stretch goal that will be unlocked at $135K!

In the conflict between Iron Force and Animal Clans, some bombshells don't blow up right away. They just lay there and become Proximity Mines until one unfortunate mecha bumps into it. With this Power-Up card, you can try to control who will be the unfortunate mecha.

Titled MISFORTUNE OR FAVOR, this Scenario will test the skills of even veteran mecha-flickers, pitting Iron Force and the Animal Clans against each other in brand new ways. Which side will emerge victorious? That can only be decided on the battlefield of Iron Forest!

Be wary, our next stretch goal is all about BANG and BLAST!

LIVE AMA WITH THE DESIGNERS AND THE ARTIST.

On Saturday February 12, at 3pm ET time, we will be hosting LIVE Ask Me Anything with the designers of Iron Forest (namely, Brian Gomez - Edgars Zaķis, Reinis Butāns, Jānis Grunte and Egils Grasmanis) and the game artist Reinis Pētersons. All these creative minds are also behind many of the Brain Games games, including the award winning ICECOOL!

Link to the live stream will be sent out via update shortly before the event.

Huge thanks from the Iron Forest team!

How did we get from ICECOOL to Iron Forest?

It all began, of course, with ICECOOL. The world’s favorite penguin-based flicking game was pretty much an immediate hit the moment anyone got to try it for their first time, and the awards soon came in afterwards, most notably the 2017 Kinderspiel des Jahres. And while we as a team were incredibly happy with the game’s success (and the fact that it continues to sell well today), there was something bugging us.

We never saw ICECOOL as a game specifically targeted at children. In our minds, it was a perfect family game, as well as something that could be accessible to a wider range of players who were willing to open themselves up to a fun experience. And so, as we began to formulate the ideas for ICECOOL2, we also set our sites on creating something that - we hoped - would appeal to the audience we wanted to reach. That game, over the course of nearly four years and a LOT of development, became Iron Forest… and we couldn’t be happier with it!

Super early prototype made up from ICECOOL boxes in 2018

Trying out different shapes and sizes of minis on the flicking base (yes, it is LEGO, yes, it is Hellboy, and the white weird penguin in the background is actually the one of the first prototypes of ICECOOL penguins)

Early prototype at the end of 2019


Iron Forest has been through a lot of changes since it was first revealed to members of the public in 2019, and we are delighted to be able to finally present it to you. You can already see some of the physical differences between this new game and its forebear ICECOOL; there definitely wasn’t a second floor in the original ICECOOL school! But if you look deeper, you’ll notice that there are many subtle differences.

Let us know if you are interested in a deeper story behind the making of the game and we will bring more stories your way!

We do, of course, have plenty of stuff in mind for stretch goals, so if you’d like to see those in your final version of the game, you know what to do… spread the word! Let’s push Iron Forest onwards and beyond!

And so the first of what we hope will be many stretch goals tumbles! Every copy of Iron Forest will now come with the awesome Barricade Power-Up card, which will undoubtedly mess with plenty of plans, no matter what side of the battle you may be on…

Using this card means physically placing it in the opening between two boxes, and should any mecha (even one of your own) smash into it, they’ll immediately take damage, then the card is removed. So if you’ve got a certain space you really want to protect on the board, judicious use of the Barricade could help you keep it locked down!

But what do we have in store next? Well, our second stretch goal is another Scenario added to the game!

The Scenario unlocks at $100k, which we know will be reached in no time! Keep sharing the campaign!

Thank you all from the Iron Forest team!